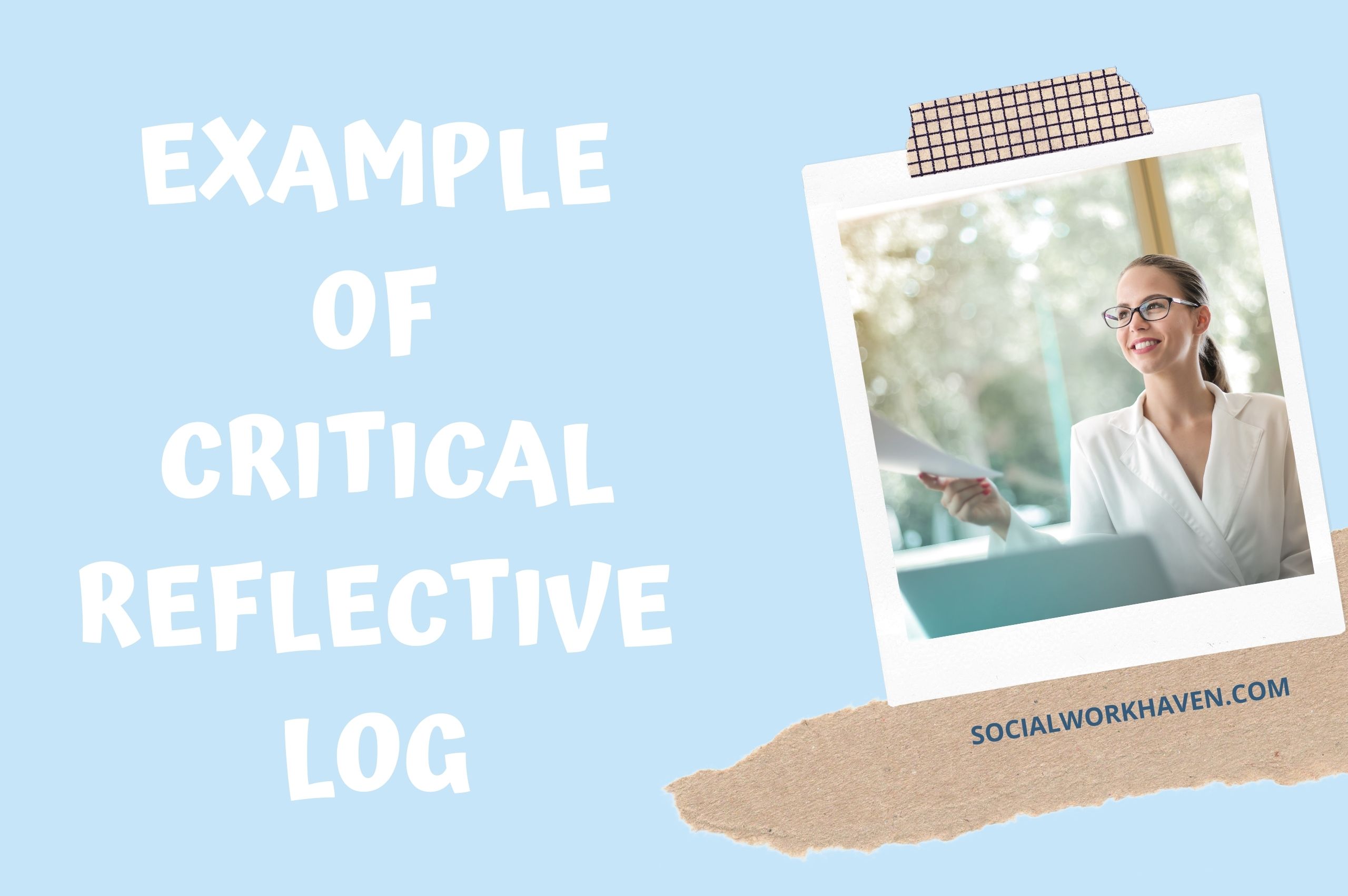 As a social work student on placement or as a newly qualified social worker doing your ASYE, you may be required to write several reflective logs.

This is an example of a reflective log to help you think about your own reflective writing.

I will also draw on other domains such as values and ethics, rights, justice and economic well-being, critical reflection and analysis, diversity and knowledge.

Children’s services received a call from a local school regarding parents A (mother) and B (father) who left their 4-year-old son S at home all day without being aware.

The school emphasised that S had not been in school the whole day and both parents turned up at the close of school to pick S up.

However, they were told that S was not dropped off at school and had not been in school the whole day.

Both parents then went home and found S at home on his own without the presence of any adult.

An argument ensued between A and B and this resulted in B hitting A twice on the face in the presence of the children.

A and B are of an Asian origin and they have 4 children between them.

They have been married for 16 years and live together in a rented house.

As soon as I read the email asking me to start work on the case, I felt a bit apprehensive as it was the first case I was taking a lead on.

However, I felt that having to co-work with an experienced social worker meant that I would have the support needed in order to complete a fair and proportionate assessment with this family.

I thought of writing up a chronology, genogram and eco-map.

I felt that this would help me understand the family structure and also find out what other professional and community networks are of significance to the family.

I was also interested in finding out about other support networks that the family might have so a genogram would help in showing historical family relationships.

Writing the chronology and genogram and reading the referral helped me produce a list of questions for the initial meeting and think of possible interventions for this family.

However, I realised that this might not be a list I should follow rigidly as depending on the flow of our conversation and what is important, I could ask different questions alongside.

I knew building this set of questions will save time and help me ask important questions, such as what causes B to hit A in the presence of the children.

I made the initial call to A and B and asked: “when is the best time for me to arrange a visit”.

They both agreed on a time and wanted me to come to the family home.

I was happy with the venue and felt this would also make A and B more relaxed.

I checked my journey and realised it would take me 30 minutes to get to the address so I planned to leave the office 45 minutes before the appointment time in order to arrive there on time as first meetings can leave a lasting impression.

I also felt that lateness also gives the wrong impression, and being on time means the service user would feel that the visit matters and that they matter to you.

You may also be interested in the following logs :

I planned to be fair and respectful and seek to be empathic at the same time.

While seeking to be empathic with this family, I remained mindful of the fact that cultures vary, and as a social worker, I should be careful not to stamp my own values and ethics on the situations and circumstances of others.

I felt the planning and preparation for the initial visit went well; I felt that I could have been more creative and visits could have been planned in parallel with other members of their support network such as the school.

In the future, I will aim to book and plan other visits in parallel in order to save time.

I learned I could type while on the phone to service users when they are giving me further information on their referral.

This would help save time instead of writing my conversation on a piece of paper and then later transcribing my notes.

This way, it is also likely to get most of the conversation I have with the service user verbatim.

The BASW code and ethics for social work highlights on these values and ethical principles which underpin my practice.

I am aware that as a social worker I should be able to maintain an appropriate boundary and distance between my service users and myself.

However, I was conscious of the fact that it will be difficult to establish an effective working relationship with this family if I kept myself completely detached from their experience.

In addition, I share the views of writers such as Carl Rogers (1961) and Truax and Carkhuff (1967) that social work is more effective when support for the individual is founded on warmth, empathy and genuineness on the part of the practitioner.

Crisis Intervention is an approach which is premised on the argument that crises are fundamental.

Ignoring the nature, basis and implications of crisis can be seen as dangerous, costly and detrimental to good professional practice (Wilson, 2011).

It is therefore essential for social workers to develop a clear and thorough understanding of crisis-related issues and learn the skills and techniques required to relate such concepts to our practice with people in crisis.

According to (Roberts, 2005, p. 778), a “crisis” has been defined as an acute disruption of psychological homeostasis in which one’s usual coping mechanisms fail and there is evidence of distress and functional impairment.

The subjective reaction to a stressful life experience that compromises the individual’s stability and ability to cope or function.

The primary cause of a crisis is an intensely stressful, traumatic, or hazardous event, but two other conditions are also necessary:

(1) the individual’s perception of the event as the cause of considerable upset and/or disruption; and

(2) the individual’s inability to resolve the disruption by previously used coping mechanisms.

B is in crisis and lacked patience and was irritable. He suffers from paranoia and felt that A was engaging with the wrong group of people who are influencing her negatively.

He lacks motivation and has been out of work for about 3 months. In addition, he blames every mishap on his wife A and this is affecting her emotionally.

His constant argument with A and physical abuse in front of the children is causing them emotional harm.

For an effective outcome, the major problem affecting B will need to be identified and he would need to deal with his emotions and feelings.

An action plan will need to be generated, which would include a referral to MARAC. Follow-up visits will be initiated to ensure that the crisis is on its way to being resolved and to assess the overall functioning of the family.

The Domestic violence, crime and victims act 2004 helps stop domestic abuse and makes it unlawful to cause or allow serious physical harm to a child or vulnerable adult.

Therefore, the risk (B) can be removed from the family home if he does not engage in interventions that are put in place and does not stop hitting his wife.

Section 76 of the Serious Crime Act 2015 makes it an offence for an individual to exhibit a controlling or coercive behaviour in an intimate or family relationship.

If B does not stop abusing his wife physically, which has an emotional impact on all 4 children, he could face a maximum sentence of 5 years’ imprisonment, a fine or both.

Roberts, A. R (2005). Bridiging the past and present to the future of crisis intervention and crisis management. (3rd ed.) New York: Oxford University Press.