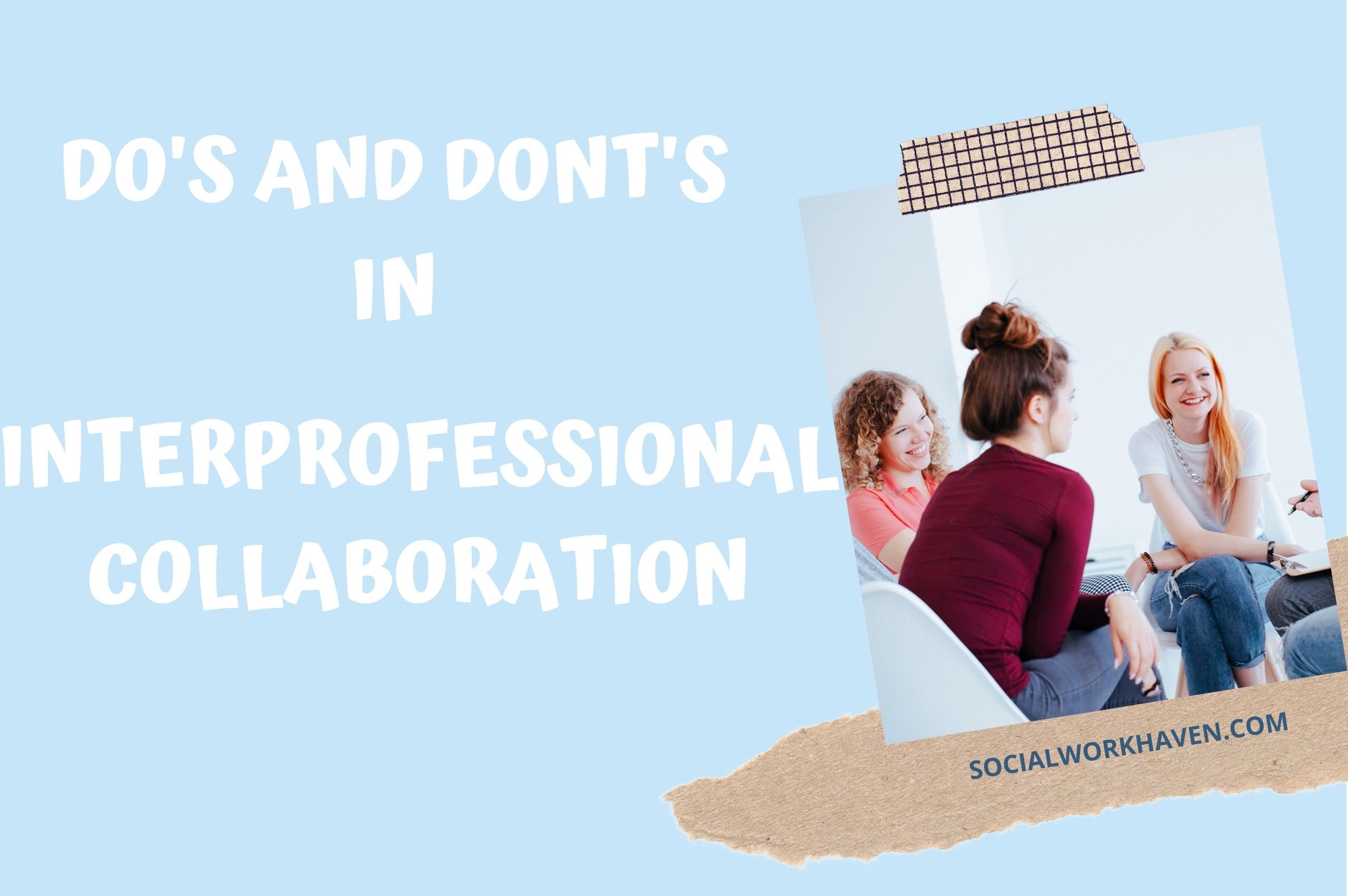 Have you ever wondered what interprofessional collaboration is all about?

Well, within interprofessional collaboration, health and social care professionals work in partnership with other agencies, the people they support, carers and family.

What is interprofessional collaboration in social work?

Interprofessional collaboration in social work is when more than two or more professionals come together to achieve a common goal.

In this article, I will look back on a group work to help determine what hinders or enhances interprofessional collaboration in social work and collaborative working with service users/carers.

I will use Gibbs reflective cycle in this reflective piece to unpick the learning gained.

The team comprised 5 members, and we assigned each person a particular aspect of the presentation to research on.

According to Belbin’s model of teamwork, if we do not balance a team, individuals will compete rather than cooperate for the team tasks and responsibilities that best suit their personalities (Belbin, 2004).

Hence, we assigned each member a role to play to create a more balanced team and improve performance. We scrutinised the issues presented and summarised our findings on a power-point.

We discussed and challenged conflicting areas of our presentation while remaining critical of each other and I felt this helped me develop a reflective learning attitude and a deeper insight into the need for effective, inter-professional and inclusionary practice with service users/carers in social work practice.

Reflecting on my role as a ‘co-ordinator’, this meant that I was the person in charge of collating individual research on a power point.  I had to communicate with team members regularly and ensure our presentation was clear, analytical and appealing visually.

I felt this role did not completely match my personality profile as I viewed myself to be more of a ‘finisher’ because my skills lie in my ability to scrutinise a piece of work for errors, subjecting it to the highest quality.

In hindsight, I realise that communicating with the team in a clear and assertive way was perhaps the most challenging part of my role. I often felt uneasy reminding members to submit their work and sensed that they were not motivated. BUT, it also allowed me to build upon my interpersonal skills.

According to Largo and Johns (2008), when working on tasks, it is important to ensure that our roles match our real-life qualities, as this will help produce positive outcomes.

However, Hale (1993) contends that taking on roles that may not match our known talents allows us to unearth some hidden abilities which may help contribute towards our professional growth and help produce positive outcomes.

What this means in practice is that during interprofessional collaboration or multi-agency meetings (e.g. Child Protection Conference) an allocated social worker may be absent because of unforeseen circumstances.

When that happens, I should be able to quickly check the case notes, inform myself and assume the role of that person if required in order for the meeting to proceed and an outcome reached.

This is because where possible, there is no need to delay decisions made regarding the welfare of a service user.

Similarly, Section 1 (2) of the Children Act 1989 emphasises on a ‘no delay’ principle which states that when an application is made to the court for an order, delay within those proceedings should be avoided at all times (Davis, 2014).

Knowledge of systems theory has enabled me to recognise that understanding roles and responsibilities and being clear about the unique structures/systems means that a seamless response can be delivered to the service user/carer.

Karpman’s Drama Triangle clarifies the connection between responsibility and power and their relationship to boundaries.

The triangle refers to the 3 individual roles within a group; victim, persecutor and rescuer (Maclean & Harrison, 2009).

Sometimes I felt like a rescuer within the team. I felt I needed to get things done and consequently when some team members were not providing their part of the research work, I would offer help ‘unasked’ rather than find out if and how that team member (victim) wants to be supported.

In retrospect, what was good about this experience was that I could put information together quickly however, I realise this meant that I was making the others feel powerless and dependent on me.

What this means in practice is that I can easily assume the role of a ‘rescuer’ when working with service users/carers, which can reinforce the ‘victim role’ on the service user, thus reinforcing dependence.

According to Maclean and Harrison (2009), social work is a relationship-based practice and may sometimes be complex.

The complexity lies in the tendency for service users/carers to become dependent on their social workers through their ongoing interaction. BUT, social work seeks to empower and promote service user/carer independence (Payne, 2014).

With this knowledge in mind, I feel that a way of promoting independence is by introducing more people into the lives of service users/carers so they are less dependent on one source of support.

For instance, by introducing a befriender for an older person, or summer camps for younger adults.

What are interprofessional skills?

For most part of our group work, I felt the team exchanged information effectively, and perhaps we achieved our overall goal because we worked as a cohesive team and used the right communication tools such as emails and google messenger.

However, I felt that communication could have been improved if we had used more online tools such as Skype for our meetings instead of meeting at the University premises.

Excellent communication skills are essential for establishing the quality of relationships that promote successful social work outcomes (Gary & Webb, 2012). BUT, poor communication can cause poor outcomes for the service user (e.g. in the case of Victoria Climbie) (Munro, 2011).

Wilson et al. (2011) also highlights that the form of communication may vary from one service user to another. For instance, a member of our group was dyslexic, so I made sure that the printouts for team meetings were dyslexic-friendly with large fonts and colours to help separate words and make reading easier for her.

In retrospect, I realise that this was a way of positively striving to meet her needs, and I took a deliberate action to create an environment where she felt respected and could contribute equally thus, promoting inclusiveness while also recognising diversity.

Initially, I felt apprehensive about the group because I was mindful that some members were not cooperative in their previous groups.

This awareness shattered any hopes I had in producing quality work. However, I reflected in-action and realised that these thoughts clouded my mind with negative emotions because of previously held sentiments.

To my surprise, these members were very cooperative and presented great ideas.

Knott and Scragg (2007, p6) remind us that “it is easy to reinforce previously held opinions about people and situations which may lead to prejudice and discriminatory practice if we do not recognise what we are using to make sense of reflections”.

I learned that holding on to such negative emotions meant that I was acting on my prejudice and this is discriminatory.

What this might mean if we were working in partnership with the service user/carer is that being judgemental, having an unconscious bias and being discriminatory can hinder collaborative practice with service users/carers.

To remain non-judgmental and practice in an anti-discriminatory and anti-oppressive manner, I should approach cases with an open mind.

Thompson (2006) uses the PCS model to analyse discriminatory behaviour, showing how it occurs at the personal, cultural and societal level.

A social worker who does not properly reflect on their assumptions, can bring all three levels into their work.

Therefore, it is important that I am self-aware and constantly reflect to help improve outcomes for the service user and foster collaborative working relationships.

Self-awareness according to Wong (2003) refers to recognising our own skills, personal strengths and flaws in order to self-improve. There was one male member within the group and occasionally, I made comments like “men are better at group presentations” and “women are not good at research”.

Rothman (1999) argues that we may express prejudices and stereotypic values in conversations, acts or behaviours since we hide them in our subconsciousness.

They drew my attention to these negative remarks, and I realised that constantly putting someone down based on my preconceived perceptions will not encourage them to succeed.

Without self-awareness and knowledge, I may allow my personal values to interfere with a fair intervention/assessment.

Through this group work, I learned that I need to encourage people to be independent instead of depending on me.

I learned to have a heightened and reflective sense of self-awareness for professional growth. I also learned that my strength lies in my ability to listen to others while remaining empathic to people’s experiences and difficulties.

I feel that this is a very important skill to use in practice as it helps make service users feel valued and helps foster collaborative practice.

What social work values do you need in interprofessional practice?

Carl Rogers, who developed the person-centred approaches, emphasised that the attitudinal qualities of a social worker should be that of empathy, authenticity and respect (Wilson et al., 2011).

This view is supported by Biestek who also highlighted that the ethical principles for effective practice include individualisation, acceptance and non-judgemental attitude (Banks, 2012).

The power imbalance between professionals and service users/carers, and the tendency to prejudice/discriminate cannot be eliminated completely , however with legislations such as the Equality Act 2010 in place, it brings the imbalance to an equilibrium encouraging proportionality in practice. 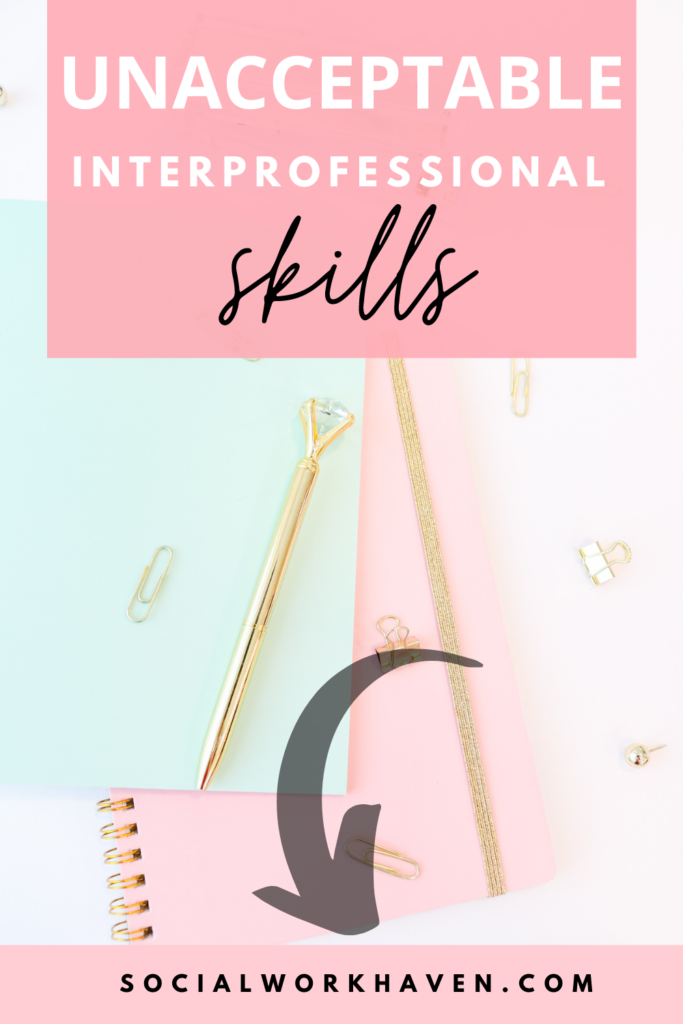