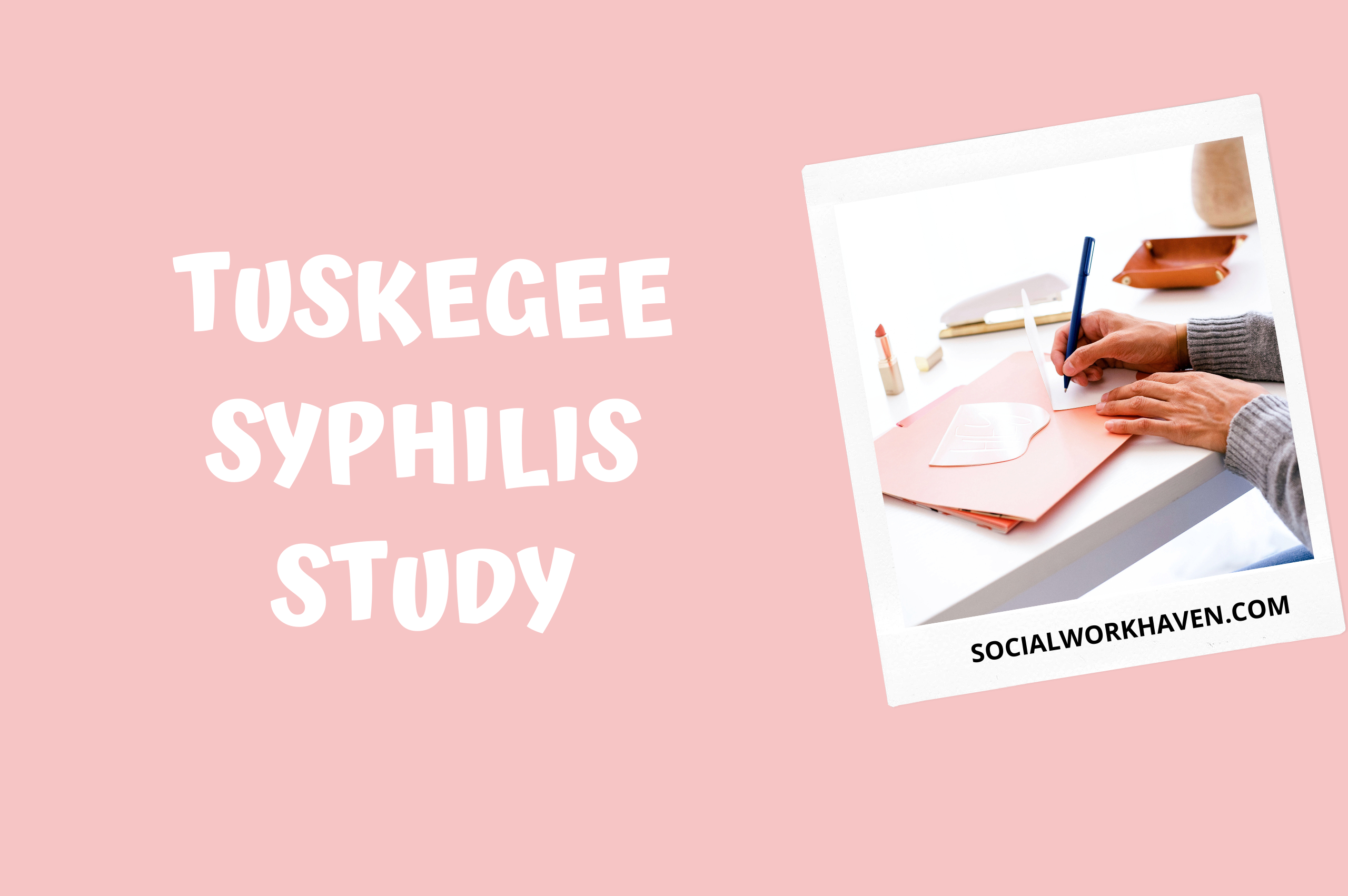 Before we delve into the Tuskegee Syphilis Study and any ethical concerns, first let us try to understand the meaning of Tuskegee.

According to Wikipedia, the name “Tuskegee” comes from Spanish “Tasquiqui”, which came from the Muskogee word “Taskeke”, a name of a Greek settlement at this site, meaning “warriors.” Tuskeegee is also a city in E Alabama.

The Tuskegee Study refers to an experiment on human beings around untreated syphilis.

The subjects were Black men, and it has been recognised as one of the longest nontherapeutic experiments on human beings in medical history.

The United States Public Health Service (USPHS), started working with the Tuskegee Institute in 1932 on a study with the aim of recording the natural history of syphilis.

It was originally called the “Tuskegee Study of Untreated Syphilis in the Negro Male” but it is now referred to as the “USPHS Syphilis Study at Tuskegee”).

The study initially aimed to determine the natural course of untreated latent syphilis in some African American men in Tuskegee, Macon County, Alabama. The research involved 600 Black men – 399 with syphilis, 201 who did not have the disease.

Participants’ informed consent was not collected. Researchers recruited participants with misleading promises and told the men they were being treated for “bad blood,” a local term used to describe several ailments, including syphilis, anaemia, and fatigue.

In exchange for taking part in the study, the men received free medical exams, free meals, and burial insurance.

The subjects were recruited with misleading promises of “special free treatment,” which were actually spinal taps done without anaesthesia to study the neurological effects of syphilis, and they were enrolled without their informed consent.

The subjects received heavy metals therapy, standard treatment in 1932, but were not offered antibiotic therapy when it became clear in the 1940s that penicillin was a safe and effective treatment for the disease.

When penicillin became widely available by the early 1950s as the preferred treatment for syphilis, this therapy was again withheld.

On several occasions, the USPHS actually sought to prevent treatment.

Following a press release story in 1972 about the Tuskegee study, an Ad Hoc Advisory Panel was appointed to review the study.

The panel concluded that the study was “ethically unjustified”. This meant that the results were disproportionate compared to the known risks to the human subjects involved.

In October 1972, the panel advised stopping the study. A month later, the Assistant Secretary for Health and Scientific Affairs announced the end of the study.

In order to ensure these services were provided as efficiently as possible, the Tuskegee Health Benefit Program (THBP) was established.

In 1975, participants’ wives, widows and children were added to the program.

Later in 1973, a class-action lawsuit was filed on behalf of the study participants and their families, resulting in a $10 million, out-of-court settlement in 1974.

It is paramount to hence adhere to the standards of conducting research.

When a scientific research is conducted in a way that contravenes ethical norms and standards or researchers go too far in their experiments, research is branded as unethical.

Unethical in science, pertains to the various acts of fabrication, falsification, plagiarism or any other practices that deviate from those that are accepted standards of research within the scientific community for proposing, conducting or reporting research.

Alternatively, it is referred to as misconduct in research writing. It disregards honest error or differences with interpretations or judgments of one’s findings.

In May 1997, President Bill Clinton issued a formal Presidential Apology relating to the Tuskegee study here.

What ethical principles were violated in the Tuskegee Syphilis study?

List 5 ethical problems that occurred in the Tuskegee Syphilis study

The Tuskegee syphilis study raises a host of moral problematic issues emanating from its violation of the ethical principles guiding research involving human subjects. The issues include

Does the Tuskegee study differ from today’s research studies for HIV and AID?

Research studies are dissimilar from the Tuskegee experiment in modern scientific research.

Whiles the Tuskegee Syphilis study had no protocol or any supervision by an independent review board, no AIDS study or any other medical study carried on human subjects in the United States can be conducted today under those conditions.

At the present, medical research on human subjects should be approved and monitored by an institutional review board that includes members not affiliated with the institution.

Besides the above, in the Tuskegee study, no information about the experiment procedure, possible effects and adverse effects were given to the subjects about the true nature of the study and thus informed consent was not obtained.

Evidently, such activities would be in clear violation of the National Research Act and the accompanying legislation on the protection of human subjects.

Furthermore, the subjects of the Tuskegee study were prevented from getting known and effective treatment for syphilis at that time.

While no such treatment has been found yet for AIDS, the HIIV/AIDS prevention programs aim to disseminate true and accurate information about the nature of this syndrome; their efforts are contrary to what the researches in the Tuskegee study did.

What influence has Tuskegee study had on the conduct of clinical trials?

The Tuskegee study generated the essence of the need for the research community to be pay attention and interrogate the issue of distrust among African American if the said population or representation is to ever part take in a similar program.

Scientists must establish trusting relationships with any given population of studies which must be built on service and mutual respect prior to the onset of a research program.

Individual researchers should state their commitment to ethical research conduct and describe provisions that they have made to protect participants in their particular studies.

The Tuskegee study is symbolic of the larger problem of African-American distrust of the largely white medical establishment which has evolved in the presence of racial discrimination, racial inequities in quality of care received and a previous history of medical research misuse.

The need for an increase in trust with the African American community is quintessential in the conduct of clinical trials.

Furthermore, the need to provide frank explanations for the experimental program cannot be under emphasised.

Studies and initiatives that specifically target racial or ethnic minorities or that are likely to result in the disproportionate representation of racial minorities among study participants.

What was the purpose of the Tuskegee study?

Tuskegee Institute wanted to examine the effects of untreated syphilis.

At the time, only a dangerous treatment involving the infusion of toxic metals was available to treat syphilis.

What is Tuskegee famous for?

The city is best known as the seat of Tuskegee University (1881), originally a school for training African American teachers and now a private, coeducational institution of higher learning.

This city was the principal station for the scientific experiment whose main purpose of study was to determine whether penicillin could prevent and not just cure syphilis infection.

Majority of the unfortunate subjects of this program who got infected never received medical intervention.

To date, this city in Alabama is marked with the atrocities of the science community on the black population within that area.

What was the main ethical violation in the Tuskegee study of untreated syphilis?

Among the numerous codes of ethics that were breached during the Tuskegee study in 1932, the predominate ethical violation was the voluntary informed consent.

The rationale of voluntary informed consent is an essential ethical requirement in biomedical research involving human experiment. It obligates the medical expert to ensure that selected research subjects are provided with detailing information about the medical procedures involved.

Through this, the details of the procedure need to be relayed to the participants in non-technical terms to enable them to grasp the concept, thus granting either their informed consent or informed refusal to undertake such a medical procedure.

In studies which require humans, it is very immoral to seek consent of the participants through acts of deception.

Additionally, when consent is acquired through works of manipulation as apparent in the Tuskegee study, it could portray research as a kind of human experimentation engaged in by scientists to satisfy nonaltruistic desires, and this may prompt people from undertaking the program.

This could equally result in litigation of the physicians or medical researchers.

Where can I find Tuskegee experiment podcast?